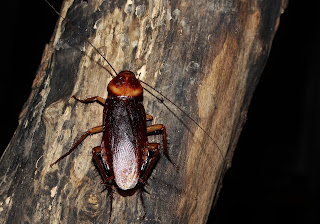 The American cockroach (Periplaneta americana), also colloquially known as the waterbug, but not a true waterbug since it is not aquatic, or misidentified as the palmetto bug (see Florida woods cockroach for the differences), is the largest species of common cockroach, and often considered a pest. It is also known as the ship cockroach, kakerlac, and Bombay canary
Despite the name, none of the Periplaneta species are endemic to the Americas; P. americana was introduced to the United States from Africa as early as 1625. They are now common in tropical climates because human activity has extended the insect's range of habitation, and are virtually cosmopolitan in distribution as a result of global commerce 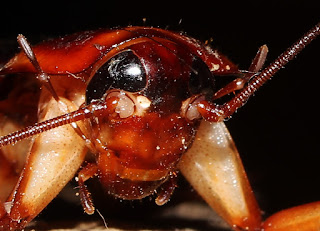 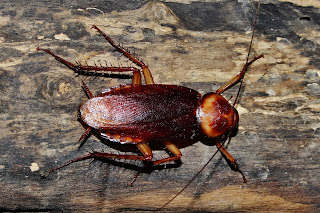 Cockroaches date back to the Carboniferous period. Cockroaches are thought to have emerged on the supercontinent Pangaea, or on Gondwana, the daughter continent of Pangaea. The cockroach made many adaptations over the years to be able to survive the major die offs to which many species succumbed

American cockroach adults grow to an average length of around 4 cm (1.6 in) and about 7 mm (0.28 in) tall. They are reddish brown and have a yellowish margin on the body region behind the head. Immature cockroaches resemble adults except they are wingless.
The cockroach is divided in three sections; the body is flattened and broadly oval, with a shield-like pronotum covering its head. A pronotum is a plate-like structure that covers all or part of the dorsal surface of the thorax of certain insects. They also have chewing mouth parts, long, segmented antennae, and leathery fore wings with delicate hind wings. The third section of the cockroach is the abdomen. 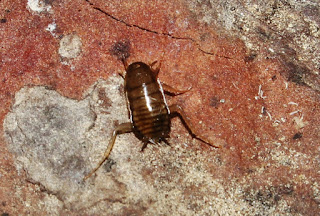 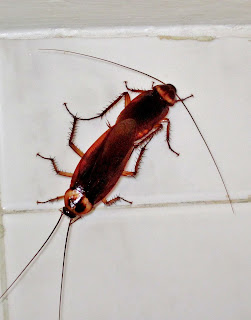 The insect can travel quickly, often darting out of sight when someone enters a room, and can fit into small cracks and under doors despite its fairly large size. It is considered one of the fastest running insects. 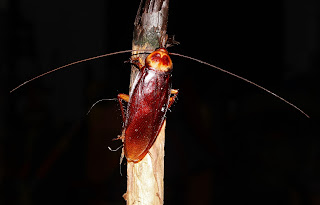 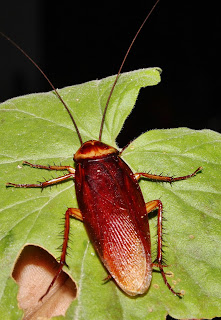 In an experiment carried out at the University of California, Berkeley in 1991, a Periplaneta americana registered a record speed of 5.4 km/h (3.4 mph), about 50 body lengths per second, which would be comparable to a human running at 330 km/h (210 mph).
It has a pair of large compound eyes, each having over 2000 individual lenses, and is a very active night insect that shuns light. 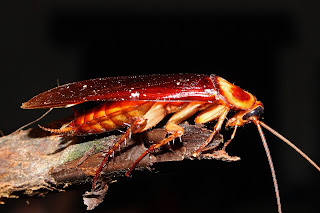 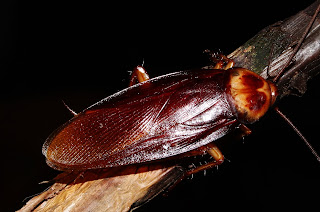 The American cockroach shows a characteristic insect morphology with its body bearing divisions as head, trunk, and abdomen. The trunk, or thorax, is divisible in prothorax, mesothorax and metathorax. Each thoracic segment gives rise to a pair of walking appendages (known as legs). The organism bears two wings. The forewings, known as tegmina arises from mesothorax and is dark and opaque. The hind wings arise from metathorax and are used in flight, though they rarely do. The abdomen is divisible into ten segments each of which is composed of dorsal tergites and ventral sclerites 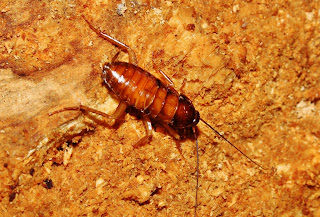 The odorous secretions produced by American cockroaches can alter the flavor of food. Also, if populations of cockroaches are high, there will be a strong concentration of this odorous secretion. Cockroaches can pick up disease-causing bacteria, such as Salmonella, on their legs and later deposit them on foods and cause food infections or poisoning. House dust containing cockroach feces and body parts can trigger allergic reactions and asthma in certain individuals 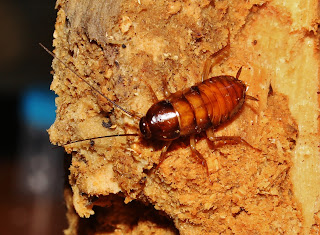 American cockroaches generally live in moist areas, but can survive in dry areas if they have access to water. They prefer warm temperatures around 29 °C (84 °F) and do not tolerate cold temperatures. These cockroaches are common in basements, crawl spaces, cracks and crevices of porches, foundations, and walkways adjacent to buildings. In residential areas outside the tropics these cockroaches live in basements and sewers, and may move outdoors into yards during warm weather.
American cockroaches have three developmental stages: egg, nymph, and adult. Females produce an egg case (ootheca) which protrudes from the tip of the abdomen. On average, females produce 9–10 ootheecae, although they can sometimes produce as many as 90. The cockroach is paurometabolous. After about two days, the egg cases are placed on a surface in a safe location. Egg cases are about 0.9 centimetres (0.35 in) long, brown, and purse-shaped. Immature cockroaches emerge from egg cases in 6–8 weeks and require 6–12 months to mature. After hatching, the nymphs feed and undergo a series of 13 moultings (or ecdysis). Adult cockroaches can live up to an additional year, during which females produce an average of 150 young.
American cockroaches are omnivorous and opportunistic feeders that eat a great variety of materials such as cheese, beer, tea, leather, bakery products, starch in book bindings, manuscripts, glue, hair, flakes of dried skin, dead animals, plant materials, soiled clothing, and glossy paper with starch sizing. They are particularly fond of fermenting foods. They have also been observed to feed upon dead or wounded cockroaches of their own or other species.
Due to their large size and slow development, large infestations of these insects are not common within houses. In cold climates these cockroaches may move indoors when it turns cold, seeking warmer temperatures and food. Cockroaches may enter houses through sewer connections, under doors, around plumbing, air ducts, or other openings in the foundation. Cockroach populations may be controlled through the use of insecticides. It is also wise to cover any cracks or crevices through which cockroaches may enter. Also, always clean any spills or messes that have been made so that the cockroaches will not be attracted to the food source. Another way to prevent an infestation of cockroaches is to thoroughly check any material that is brought inside. Cockroaches and egg cases can be hidden inside or on furniture, in boxes, suitcases, grocery bags, etc.
From Wikipedia, the free encyclopedia
Photos  Geri, 28/9/2015  by George Konstantinou 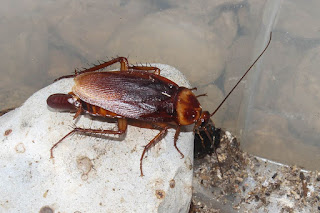 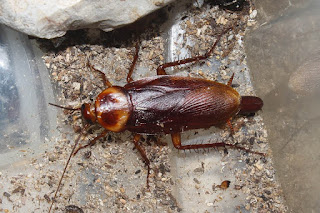 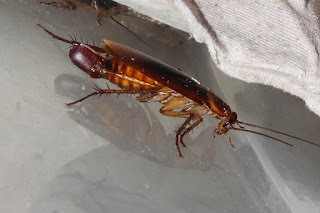 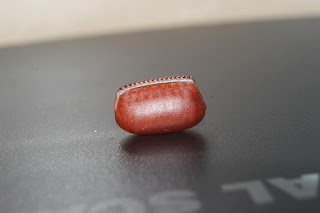