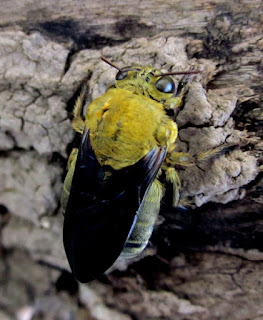 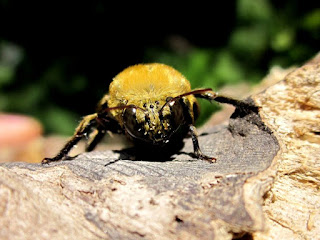 Carpenter bees (the genus Xylocopa in the subfamily Xylocopinae) are large bees distributed worldwide. Some 500 species of carpenter bees are in the 31 subgenera. Their common name is because nearly all species build their nests in burrows in dead wood, bamboo, or structural timbers (except those in the subgenus Proxylocopa, which nest in the ground). Members of the related tribe Ceratinini are sometimes referred to as "small carpenter bees". 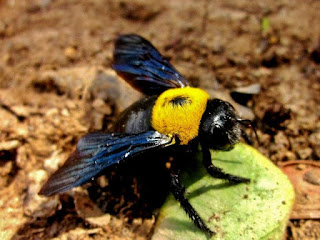 Carpenter bees are traditionally considered solitary bees, though some species have simple social nests in which mothers and daughters may cohabit. However, even solitary species tend to be gregarious, and often several nest near each other. When females cohabit, a division of labor between them occurs sometimes, where one female may spend most of her time as a guard within the nest, motionless and near the entrance, while another female spends most of her time foraging for provisions. 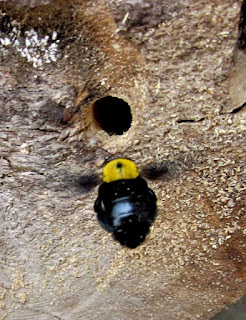 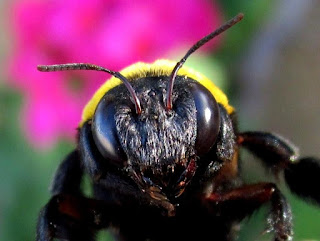 Carpenter bees make nests by tunneling into wood, vibrating their bodies as they rasp their mandibles against the wood, each nest having a single entrance which may have many adjacent tunnels. The entrance is often a perfectly circular hole measuring about 16 mm (0.63 in) on the underside of a beam, bench, or tree limb. Carpenter bees do not eat wood. They discard the bits of wood, or reuse particles to build partitions between cells. The tunnel functions as a nursery for brood and storage for the pollen/nectar upon which the brood subsists. The provision masses of some species are among the most complex in shape of any group of bees; whereas most bees fill their brood cells with a soupy mass, and others form simple spheroidal pollen masses, Xylocopa species form elongated and carefully sculpted masses that have several projections which keep the bulk of the mass from coming into contact with the cell walls, sometimes resembling an irregular caltrop. The eggs are very large relative to the size of the female, and are some of the largest eggs among all insects.[8] 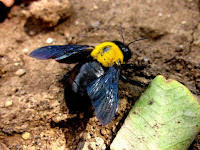 Two very different mating systems appear to be common in carpenter bees, and often this can be determined simply by examining specimens of the males of any given species. Species in which the males have large eyes are characterized by a mating system where the males either search for females by patrolling, or by hovering and waiting for passing females, which they then pursue. In the other mating system, the males often have very small heads, but a large, hypertrophied glandular reservoir is in the mesosoma, which releases pheromones into the airstream behind the male while it flies or hovers. The pheromone advertises the presence of the male to females
From Wikipedia, the free encyclopedia
Photos Nicosia, Geri by George Konstantinou

Email ThisBlogThis!Share to TwitterShare to FacebookShare to Pinterest
Ετικέτες Bees of Cyprus, Insects