Migrant from the red sea 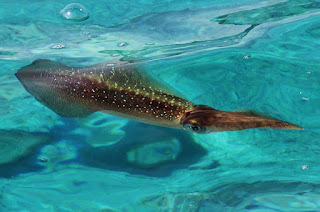 Sepioteuthis lessoniana, commonly known as the bigfin reef squid or oval squid, is a commercially important species of loliginid squid. It is one of the three currently recognized species belonging to the genus Sepioteuthis. Studies in 1993, however, have indicated that bigfin reef squids may comprise a cryptic species complex. The species is likely to include several very similar and closely related species. 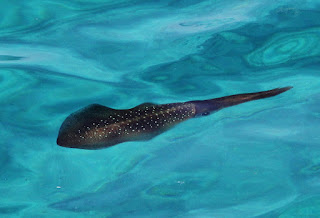 Bigfin reef squids are characterised by a large oval fin that extends throughout the margins of its mantle, giving them a superficial similarity to cuttlefish. They are small to medium-sized squids, averaging 3.8 to 33 centimetres (1.5 to 13.0 in) in length. They exhibit elaborate mating displays and usually spawn in May, but it can vary by location. The paralarvae resemble miniature adults and are remarkable for already having the capability to change body colouration upon hatching. Bigfin reef squids have the fastest recorded growth rates of any large marine invertebrate, reaching 600 g (1.3 lb) in only four months. They are a short-lived species, with a maximum recorded lifespan of 315 days. 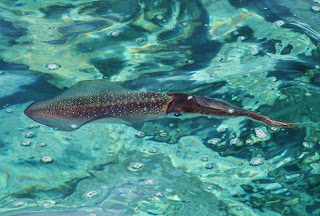 The diet of bigfin reef squids comprises mainly crustaceans and small fish. They are found in the temperate and tropical waters of the Pacific and Indian Oceans, and have recently been introduced into the Mediterranean as a Lessepsian migrant. They are commonly found near the shoreline, near rocks, and coral reefs. They are fished in vast quantities for human food in Asia. Because of their rapid growth rate, short life span, and tolerance to handling and captivity, bigfin reef squids are regarded as one of the most promising species for mariculture. They are also a valuable source of giant axons for medical research.

Like other members of the genus Sepioteuthis, bigfin reef squids are easy to distinguish from other squids in that they possess thick and muscular oval fins that extend around almost the entire mantle. The fins extend about 83 to 97% of the mantle length and are 67 to 70% of the mantle length in width.Because of these fins, bigfin reef squids are sometimes mistaken for cuttlefish, a fact reflected by their scientific names. A narrow blue or white line is visible at the point of attachment of the fins to the mantle. A fleshy ridge is also present where the fins meet at the back of the squid.

Their eyes are large and covered entirely by a transparent secondary cornea. They are greenish at the base. A pair of prominent ridges (olfactory crests) are present on the ventral surface of the head at the rear edge of the eyes. The mouth area is supported by seven triangular flaps (buccal lappets), each with 0 to 7 suckers of less than 0.2 mm in diameter and 18 to 25 teeth. The strong, curved, and short beaks (rostra) are mostly black to dark brown. The radula has seven rows of teeth.

The spermatophores of males are about 4.5 mm (0.18 in) long and 0.15 mm wide. The ink sac is pear-shaped, with a silvery blue-green outer layer. The vane of the gladius (the rigid internal remnants of the mollusc shell) is oval-shaped and pointed at both ends (lanceolate). It has a broad midrib (rachis).

The eight arms are thick, tapering to a narrow point. They are unequal in length, with arm pair I the shortest, followed by arm pair II and arm pair IV, and arm pair III the longest. All of them possess two rows of suckers. Each sucker has a diameter less than 2 mm (0.08 in), decreasing distally, and a ring of 17 to 28 sharp acute teeth. The left arm of pair IV in males is modified into a sexual organ known as the hectocotylus. They bear long fleshy protrusions (papillae) with toothless suckers at the distal portion. The tentacles are thick and long, extending the length of the mantle when retracted. They are slightly compressed laterally. A prominent ridge (a keel) is present on the outer surface of each of the tentacle clubs (the wide tip of the tentacles). There are four rows of suckers on the manus (proximal part of the club) and the dactylus (distal part of the club). The larger suckers in the centre of the manus have 17 to 18 widely spaced teeth

The bigfin reef squid is a neritic warm water-dwelling squid. They are usually found 0 to 100 m (0 to 328 ft) below the water's surface. They tend to remain close to the shoreline, near rocks and reefs. They are slightly more active during the night and will move to deeper waters or find cover in daytime. Large numbers of juveniles can often be found hiding beneath floating driftwood.

The bigfin reef squid is the most widespread species in the genus Sepioteuthis. It is found in temperate and tropical regions of the Indian Ocean and the western Pacific Ocean. Their original range extends east to the Hawaiian Islands, west to the Red Sea, north to Japan, and south to Australia and New Zealand (42°N to 42°S and 32°E to 154°W). The range has also expanded to include parts of the Mediterranean Sea. In 2002, bigfin reef squids were first documented in the Gulf of İskenderun of the southeastern Mediterranean Sea. They may have already existed in significant populations in the area as they have acquired a common name among the fishermen of the Aegean Sea – σουπιοκαλάμαρο (soupiocalamaro, literally "cuttlefish-like squid"). It is a Lessepsian migrant, reaching the Mediterranean Sea through the Suez Canal

The bigfin reef squid eats a variety of different marine organisms. Its main prey are usually prawns and other crustaceans, and fish. Captive specimens were observed to consume one fish every 2 to 25 hours.

Bigfin reef squids are, in turn, preyed upon by tuna, marlin, swordfish, and other predator fish and groundfish

Bigfin reef squids also exhibit both schooling and shoaling behaviours. Very young bigfin reef squids will also stay close together (shoaling), but do not swim together parallel to each other (schooling). Unlike most other squid species, bigfin reef squids are rarely cannibalistic. Shoals can include animals of different sizes without the threat of larger members attacking and consuming the smaller members. Whether bigfin reef squids recognise each other individually still remains unknown
From Wikipedia, the free encyclopedia
Underwater photos at Akrotiri 16/1/2016 by Kostas Aristeidou 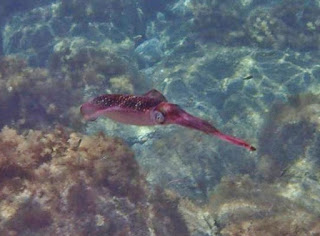 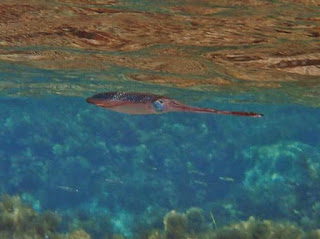 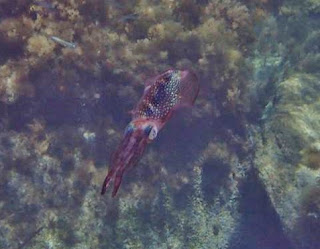 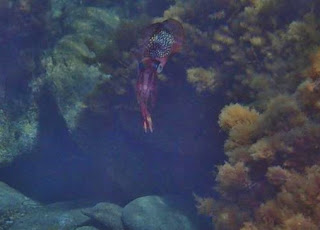 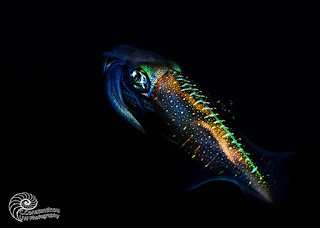 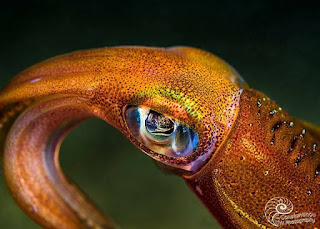 Email ThisBlogThis!Share to TwitterShare to FacebookShare to Pinterest
Ετικέτες Marine life of Cyprus